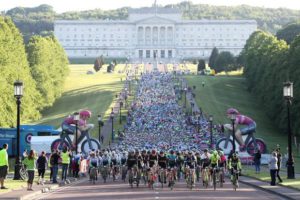 Thousands of cyclists pedal through some of the most scenic spots in Co Down on Sunday as the biggest Gran Fondo event to take place in Northern Ireland gets under way.

Started and finished at the Stormont Estate in Belfast and plotted a course through some of Co Down’s most picturesque scenery.

The race featured two routes – one through the Mourne Mountains and another that took in Strangford Lough.

The 174km Mourne loop will pass over mountains and hills steeped in Irish history with the opportunity to view the beauty of the country from the highest mountain peaks to the loughs and sea.

The 58km Strangford route will prove challenging and enjoyable for all levels of cycling enthusiasts. If you are new to cycling events or want to set yourself a personal challenge to help boost your fitness and experience that ‘Giro feeling’, then this route is for you. 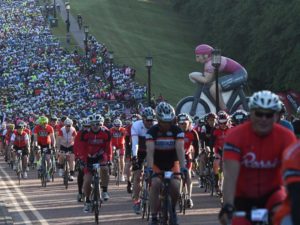 The Gran Fondo is a legacy event from the Giro d’Italia, which was staged in Northern Ireland in 2014.

It has been held annually since and organisers say it has gone from strength to strength, attracting more and more riders each year.

This year, cyclists from Russia, the USA and all across Europe have registered to take part.

The Gran Fondo also provides a boost to the local economy, to the tune of over £1.5m in 2016, while 88% of visitors described it as “good” or “extremely good”.

Powered by Precept IT
Covid-19

Green Bicycle is open for business STRICTLY through our appointment system only. Please contact us via text or email on the details provided here.